When a script creates a window and its associated user-interface elements, it can explicitly control the size and location of each element and of the container elements, or it can take advantage of the automatic layout capability provided by ScriptUI. The automatic layout mechanism uses certain available information about user-interface elements, along with a set of layout rules, to establish a visually pleasing layout of the controls in a dialog, automatically determining the proper sizes for elements and containers.

Automatic layout is easier to program than explicit layout. It makes a script easier to modify and maintain, and easier to localize for different languages. It also makes the script automatically adapt to the default font and font size used by the host application for ScriptUI windows.

Child elements of a container can be organized in a single row or column, or in a stack, where the elements overlap one other in the same region of the container, and only the top element is fully visible. This is controlled by the container’s orientation property, which can have the value row, column, or stack.

You can nest Panel and Group containers to create more complex organizations. For example, to display two columns of controls, you can create a panel with a row orientation that in turn contains two groups, each with a column orientation.

Containers have properties to control inter-element spacing and margins within their edges. The layout manager provides defaults if these are not set.

A layout manager can determine the best size for a child element through the element’s preferredSize property. The value defaults to dimensions determined by ScriptUI based on characteristics of the control type and variable characteristics such as a displayed text string, and the font and size used to display text. A value of -1 for either the width or height in the preferredSize value causes the layout manager to calculate that dimension, while using the specified value for the other.

The default font and font size are chosen differently on different platforms, and by different applications on the same platform, so ScriptUI windows that are created the same way can appear different in different contexts.

Your script establishes rules for the layout manager by setting the values of certain properties, both in the container object and in the child elements. The following examples show the effects of various combinations of values for these properties. The examples are based on a simple window containing a StaticText, Button and EditText element, created (using Resource specifications) as follows:

Each example shows the effects of setting particular layout properties in various ways. In each window, w. text is set so that the window title shows which property is being varied, and w.st.text is set to display the particular property value being demonstrated.

The orientation property of a container specifies the organization of child elements within it. It can have these values:

The following figure shows the results of laying out the sample window with each of these orientations:

These properties use the same values, which specify alignment along one axis, depending on the orientation of the container. You can specify an array of two of these strings, to specify alignment along both axes. The first string specifies the horizontal value, the second specifies the vertical value. The property values are not case-sensitive; for example, the strings FILL, Fill, and fill are all valid.

You can also set the value using the corresponding constants from the Alignment property of the ScriptUI class; for example:

If you set the alignment value using a constant and then query the property, it returns an index number corresponding to the constant, rather than a string value.

Elements in a row can be aligned along the vertical axis, in these ways:

Elements in a column can be aligned along the horizontal axis, in these ways:

Elements in a stack can be aligned along either the vertical or the horizontal axis, in these ways:

The following figure shows the results of creating the sample window with row orientation and the bottom and top alignment settings in the parent’s alignChildren property:

The following figure shows the results of creating the sample window with column orientation and the right, left, and fill alignment settings in the parent’s alignChildren property. Notice how in the fill case, each element is made as wide as the widest element in the container: 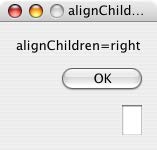 You can override the container’s child alignment, as specified by alignChildren, by setting the alignment property of a particular child element. The following diagram shows the result of setting alignment to right for the EditText element, when the parent’s alignChildren value is left:

The following figures show the results of the sample script SnpAlignElements.jsx, that demonstrates how to specify alignment in two dimensions.

The margins property of a container specifies the number of pixels between the edges of a container and the outermost edges of the child elements. You can set this property to a simple number to specify equal margins, or using a Margins object, which allows you to specify different margins for each edge of the container.

The following figure shows the results of creating the sample window with row orientation and margins of 5 and 15 pixels:

This figure shows the results of creating the sample window with column orientation, a top margin of 0 pixels, a bottom margin of 20 pixels, and left and right margins of 15 pixels:

The spacing property of a container specifies the number of pixels separating one child element from its adjacent sibling element.

This figure shows the results of creating the sample window with row orientation, and spacing of 15 and 5 pixels, respectively:

This figure shows the results of creating the sample window with column orientation, and spacing of 20 pixels:

Each element has a preferredSize property, which is initially defined with reasonable default dimensions for the element. The default value is calculated by ScriptUI, and is based on constant characteristics of each type of element, and variable characteristics such as the text string to be displayed in a button or text element.

If an element’s size property is not defined, the layout manager uses the value of preferredSize to determine the dimensions of each element during the layout process. Generally, you should avoid setting the preferredSize property explicitly, and let ScriptUI determine the best value based on the state of an element at layout time. This allows you to set the text properties of your user-interface elements using localizable strings (see Localization in ScriptUI objects). The width and height of each element are calculated at layout time based on the chosen language-specific text string, rather than relying on the script to specify a fixed size for each element.

However, a script can explicitly set the preferredSize property to give hints to the layout manager about the intended sizes of elements for which a reasonable default size is not easily determined, such as an IconButton element that has no initial image to measure.

You can set just one of the dimensions using the preferredSize; a value of -1 for either width or height causes the layout manager to calculate that dimension, while using the supplied value for the other. You can also set a maximum and/or minimum size value for a control, that limit how it can be resized. There is a default maximum size that prevents automatic layout from creating elements larger than the screen.

You can explicitly resize the controls in a window to fit the current text contents, or after the window is resized by the user, using the resize() method of the layout object.

Many dialogs consist of rows of information to be filled in, where each row has columns of related types of controls. For instance, an edit field is typically in a row next to a static text label that identifies it, and a series of such rows are arranged in a column. This example (created using Resource specifications) shows a simple dialog in which a user can enter information into two EditText fields, each arranged in a row with its StaticText label. To create the layout, a Panel with a column orientation contains two Group elements with row orientation. These groups contain the control rows. A third Group, outside the panel, contains the row of buttons.

In this simplest example, the columns are not vertically aligned. When you are using fixed-width controls in your rows, a simple way to get an attractive alignment of the StaticText labels for your EditText fields is to align the child rows in the Panel to the right of the panel. In the example, add the following to the Panel specification:

This creates the following result:

Suppose now that you need two panels, and want each panel to have the same width in the dialog. You can specify this at the level of the dialog window object, the parent of both panels. Specify alignChildren=’fill’, which makes each child of the dialog match its width to the widest child. 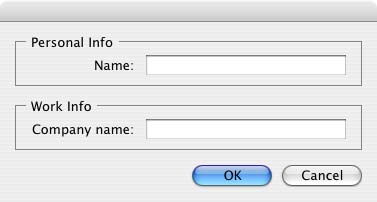 To make the buttons to appear at the right of the dialog, the buttons group overrides the fill alignment of its parent (the dialog), and specifies alignment='right'.

A stack orientation of a container places child elements so they are centered in a space which is wide enough to hold the widest child element, and tall enough to contain the tallest child element. If you arrange groups or panels in such a stack, you can show and hide them in different combinations to display a different set of controls in the same space, depending on other choices in the dialog.

For example, this dialog changes dynamically according to the user’s choice in the DropDownList.

The following script creates this dialog. It compresses the “Personal Info” and “Work Info” panels from the previous example into a single Panel that has two Groups arranged in a stack. A DropDownList allows the user to choose which set of information to view. When the user makes a choice in the list, its onChange function shows one group, and hides the other.

This script creates a dialog almost identical to the one in the previous example, except that it defines a layout-manager subclass, and assigns an instance of this class as the layout property for the last Group in the dialog. (The example also demonstrates the technique for defining a reusable class in JavaScript.)

This script-defined layout manager positions elements in its container in a stair-step fashion, so that the buttons are staggered rather than in a straight line. 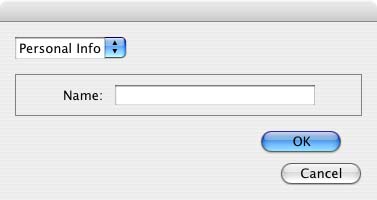 When a script creates a Window object and its elements and shows it the first time, the visible user-interface-platform window and controls are created. At this point, if no explicit placement of controls was specified by the script, all the controls are located at [0, 0] within their containers, and have default dimensions. Before the window is made visible, the layout manager’s layout method is called to assign locations and sizes for all the elements and their containers.

The default AutoLayoutManager’s layout method performs these steps when invoked during the initial call to a Window object’s show method:

The following restrictions apply to the automatic layout mechanism: